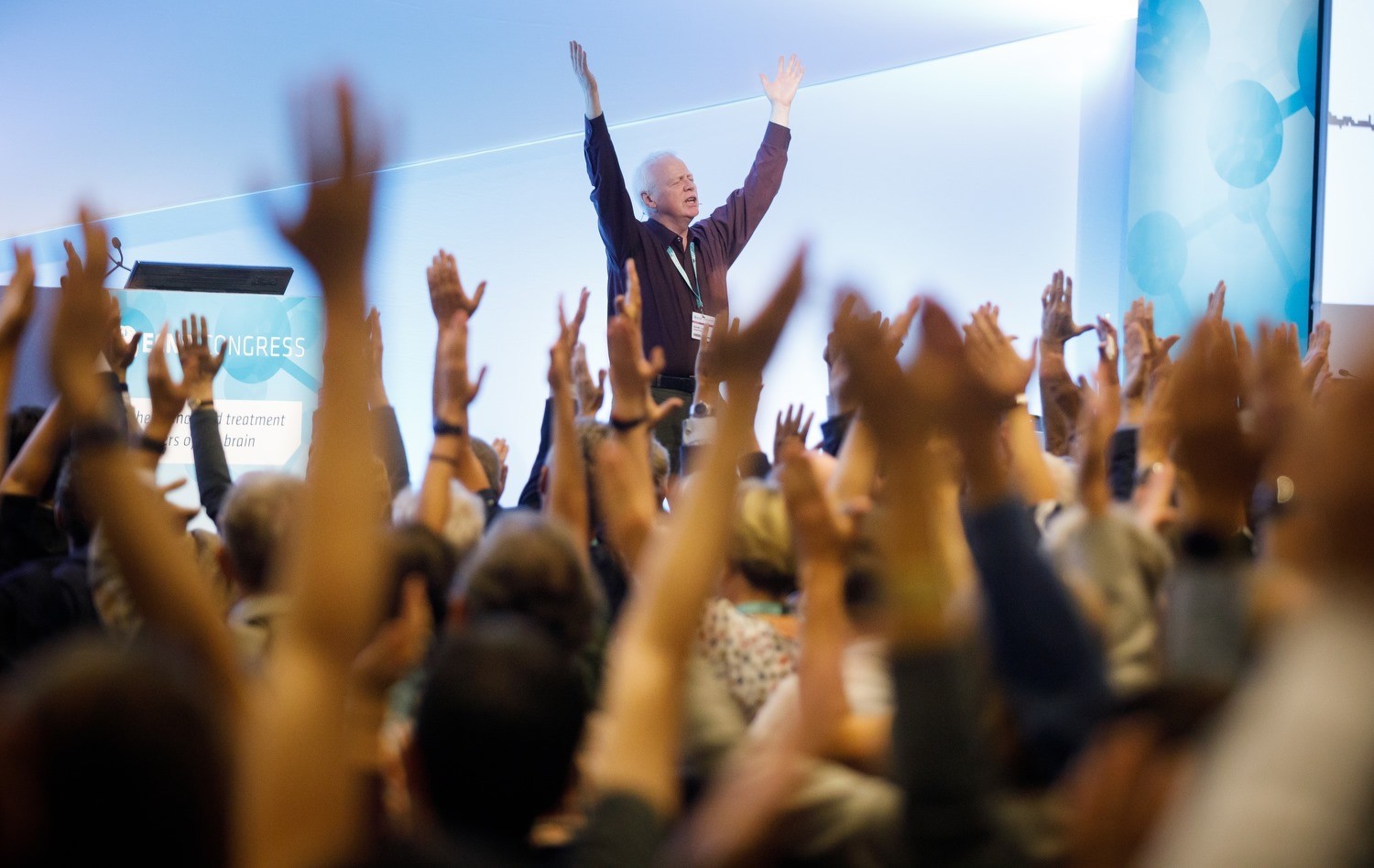 Gareth Leng was one of the founders in 1983 of the BSN. He was appointed as the Chair of Experimental Physiology in Edinburgh in 1994, after 17 years at what is now the Babraham Institute, Cambridge. He is a former Editor-in-Chief of the Journal of Neuroendocrinology, and a former President of the International Neuroendocrine Federation. He is the author of The Heart of the Brain: the hypothalamus and its hormones published in 2018, and has a second book The Matter of Facts due out in Spring 2020, written with one of his sons, Rhodri Leng.

The photo (Photo credit: ECNP ) from Barcelona was taken during his keynote address at the ECNP Congress to 5,000 psychiatrists, during which he tried to persuade them to imagine themselves as oxytocin neurones.

There are always more interesting questions than time to address them. During my career, I have followed those where I thought I could envisage the ‘shape’ of a possible answer.

My research questions are generally inspired by an ‘analogy’. For example, in my early days working on the role of oxytocin in parturition (giving birth), I puzzled over the role of endogenous opioids (opioids produced in the brain and then believed to have a particular importance in stress). I thought of circumstances where parturition might be slowed, and about the experience of women in maternity wards and the stress they might feel being in that strange environment. It seemed to me that women must feel as though they were in a ‘goldfish bowl’, inspected by a succession of strangers, and that this stress might affect endogenous opioid release. I took that analogy literally and started putting pregnant rats in goldfish bowls. Sure enough, this slowed down parturition and suppressed oxytocin release (the main driver of partuition). Giving the opioid antagonist naloxone completely reversed this effect. (Leng G et al. (1988) J Reprod Fertil. 84:345-56.)

Nearly 30 years ago, I set a young PhD student, Suzanne Dickson, the challenge of finding a way to identify growth hormone-releasing hormone (GHRH) neurones electrophysiologically (looking directly at the electrical properties of the cells). With a battery of criteria that she developed, she came to a plausible answer, but needed to test this. If she was right the GHRH cells that she had ‘identified’ would be inhibited by growth hormone (GR). We didn’t have growth hormone, but learnt from Iain Robinson about a new synthetic ‘growth hormone secretagogue’ that would selectively stimulate its release from the pituitary. Suzanne injected this while recording from a putative ‘GHRH neurone.’

The results were unambiguous – there was a massive excitation, exactly the opposite of what we had expected (Dickson SL et al. (1993) Neuroscience 53:303-6). Suzanne went on to show that these secretagogues act on GHRH neurones to stimulate GH release and on other arcuate neurones in the hypothalamus that she and Simon Luckman concluded were Neuropeptide Y (NPY) cells (these NPY cells are now known to be key drivers of appetite). Merck got interested and began to fund us – and Suzanne’s findings helped them to identify the receptor through which the secretagogues acted.

That led a Japanese group to identify the endogenous ligand – a novel peptide, now rather well known – ghrelin - and Suzanne went on to become an international leader in the ghrelin field.

Since stepping down as Head of the School of Biomedical Sciences I’m relatively free of administrative responsibilities. I still teach – I run a first year course in Biomedical Sciences and teach Honours students, but I’ve had more time to write – I’ve just sent my second book off to the publishers (my first, The Heart of the Brain, came out in 2018). In a typical day I will have a pile of papers and grants to review so I will do one of those. I’ll be working on two or three drafts of papers of my own. I’ll look in on the experiments going on in my lab and pretend that I can still contribute to them. I’ll spend time analysing data. I’ll probably argue a bit with close colleagues – Mike Ludwig especially.

What methods do you specialise in?

The core of my work has been in vivo electrophysiology, although alongside that there’s always been neuroanatomy, and functional and behavioural studies. Computational modelling has been very important over the last 15 years or so.

Who or what inspired you into neuroendocrinology?

I came to it by accident – Barry Cross gave me a job at the Babraham Institute straight after my PhD, which was in auditory physiology. He didn’t care what I did so long as it was neuroendocrinology – he gave me a lab and said “Let me know when you’ve found something interesting.”

I was one of the founders. I thought it was essential to build a close supportive community, a network that could provide a safe environment to argue, to discuss new ideas, and to get fresh ideas maybe from adjacent fields of research. A community that mingled neuroscientists, biochemists, endocrinologists and behavioralists, that spanned reproduction, metabolism and all the other areas of overlapping interest. For thirty years, the BSN meeting has been my favorite meeting, I’ve rarely missed one, and only when unavoidable. Friendships build over the years through these meetings and become an immeasurably important resource.

This year, 2019, is Journal of Neuroendocrinology’s 30th Anniversary. What is your favourite JNE paper from the last 30 years and why?

My favourite of the many that I published in JNE was published in the first issue – and why it’s my favourite is explained in Leng G, Russell JA (2019) J Neuroendocrinol. 31(3):e12662. But for other papers - that’s an impossible question. When I was editor of JNE I read every paper submitted, and there were many that I loved – it was great to have an excuse to think about such a wide range of interesting topics, and to be able to appreciate how elegantly so many experiments were designed – and how well some people can write! But if you push me today I’d go for Is there a Publication Bias in Behavioural Intranasal Oxytocin Research on Humans? Opening the File Drawer of One Laboratory by Lane et al. (J Neuroendocrinol. 2016 28(4)) - it is thoughtfully provocative and well worth anyone’s time to read.

There are lots of interesting things– the literature on "maternal photoperiodic programming" deserves watching (see the paper by Cristina de Miera, in JNE Volume: 31). I’m taken by the emerging work from comparative genomics (comparing genome sequences from different species). I’ve always felt that to properly understand a physiological system you need to combine an understanding of how it works mechanistically, how it has developed, and how it evolved. Comparative genomics is now yielding remarkable insights into evolution. It now seems clear that in our distant evolutionary ancestors, neuroendocrine neurones were multifunctional, multisensory cells that combined features of neurones and endocrine cells. Multifunctionality didn’t arise from the diversification of neuronal subpopulations – it was there at the beginning. (Leng G (2018) The endocrinology of the brain. Endocr Connect. 7:R275-R285).

Two books, Kuhn’s Structure of Scientific Revolutions and Popper’s Logic of Scientific Discovery brought me from mathematics into experimental science.

What advice would you give an aspiring neuroendocrinologist?

The output of science has been doubling every ten years or so, and that won’t stop. The challenge will be to try to make the most of this and to make your voice stand out. In any vast interconnected network, ‘hubs’ - elements that create links across disparate fields - are critically important. Neuroendocrinology is a natural ‘hub’ discipline – its importance comes from integrating understanding across diverse fields. To be an effective hub voice, you need to make these links, and to develop a clear, authoritative, individual voice. That means prioritising scholarship – knowing the literature and understanding its strengths and weaknesses; and communication – clear and cogent argument and engaging presentation. So take every opportunity to meet people, to talk, listen, and argue. Travel, go to meetings, make friends, and argue with them. Don’t fret about impact factors, enduring impact will come from the connections you make and the networks you build, and from finding your voice and learning how to project it.

I started out as a mathematician, and always felt that any proper mechanistic understanding should be translatable into a mathematical model. So a high point for me was the model of the milk-ejection reflex that I developed with Francoise Moos and others– that’s the single paper of which I’m most proud (Rossoni et al, (2008) PLoS Comput Biol. 4(7):e1000123). My colleague Duncan Macgregor has since done beautiful modelling work on the vasopressin system and other neuroendocrine systems, but that’s been more his than mine. I hope that biologists and mathematicians are becoming a bit less scared of each other, because neuroendocrine systems offer fantastic opportunities for interesting collaborations (Leng G, Macgregor DJ (2008) J Neuroendocrinol. 20:713-8 and (2018) Math Biosci. 305:29-41.)