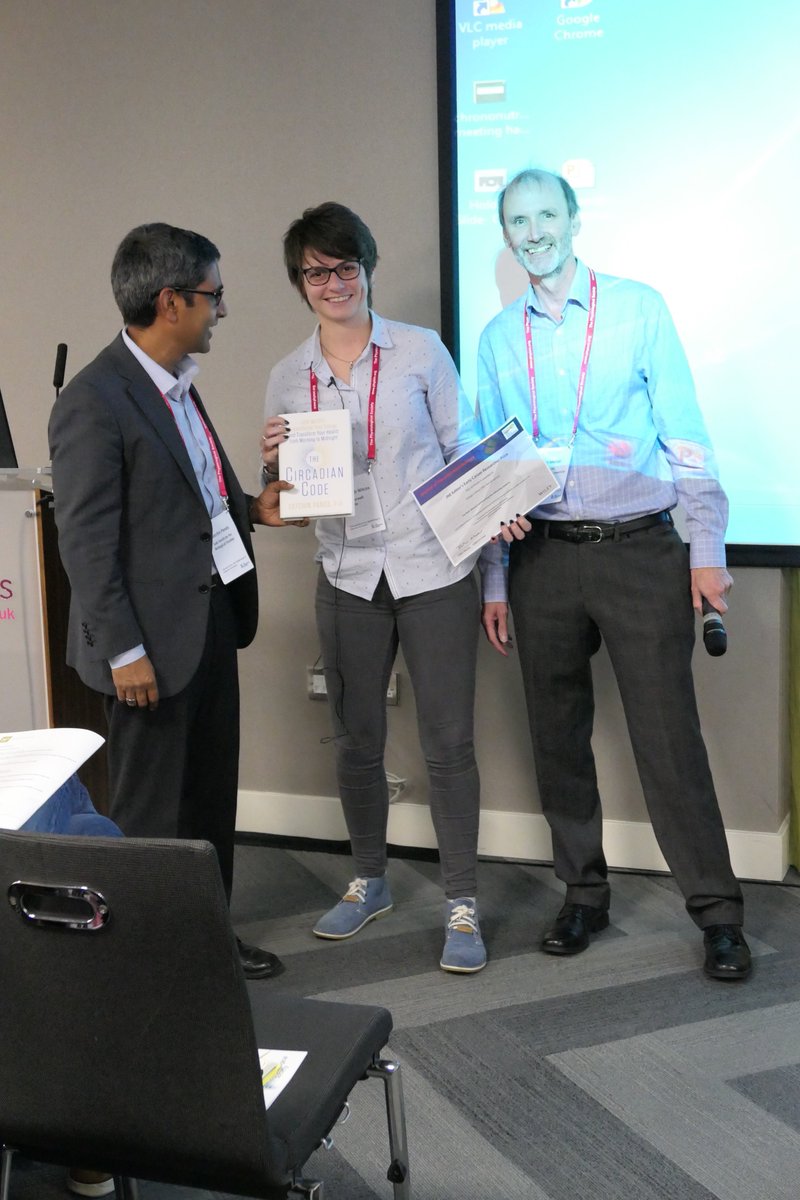 Ashleigh Wilcox won the Early Stage Researcher presentation prize a the one-day symposium on "Chrononutrition: from epidemiology to molecular mechanism" on 13 November 2018. Ashleigh was awarded the prize for excellent science and presentation skills.

Loss of Zfhx3 in maturing SCN abolishes behavioural rhythmicity, but not metabolic circadian activity in mice.

Previous work revealed an important role for the transcription factor ZFHX3 in circadian biology. A dominant missense mutation in the gene (Zfhx3 Sci) results in a short circadian period in constant conditions and altered sleep homeostasis (Parsons et al, 2015; Balzini et al, 2016). Furthermore, inducible deletion of Zfhx3 in adult mice results in acute shortening of circadian period and/or loss of rhythmicity in constant conditions (Wilcox et al, 2017). Here, we expand on this conditional mutagenesis approach to study Zfhx3’s role in the development of the key circadian pacemaker in mammals – the suprachiasmatic nucleus (SCN), and subsequent effects on circadian function in the whole animal.

Using the SCN-enriched Six3-Cre line, Zfhx3 was deleted specifically in developing anterior hypothalamus. The resulting homozygous mutants displayed a dramatic circadian phenotype; complete behavioural arrhythmia in all lighting conditions and an inability to entrain to a light-dark cycle. Subsequent histological examination revealed that the SCN in these mutants fails to mature, as validated by loss of a histological definition and lack of expression of key circadian related genes Vip, Avp and Rora. Furthermore, expression of Avp remains intact in nearby hypothalamic regions, including the paraventricular nucleus, demonstrating that a loss of SCN cell identity alone is the cause of this severe circadian disruption.

A timed feeding paradigm was employed to assess whether these animals are able to display food anticipatory activity (FAA), despite the lack of an SCN. These experiments showed that this was indeed the case, indicating that a food entrainable oscillator (FEO) is intact in these mice. When housed in metabolic caging on standard ad libitum diet, circadian rhythms in metabolic measures are also present. Therefore, it appears that peripheral circadian activity related to metabolism can persist despite these mice being behaviourally arrhythmic throughout their lifetime.

This work highlights the sustained importance of Zfhx3 in circadian pacemaker function. Moreover, in contrast to many previous models of SCN dysfunction such as SCN ablation, these mutants provide a unique opportunity to study how a deficiency in SCN maturation impacts upon the whole organism over its lifetime. The fact that these animals display FAA gives weight to the argument that a FEO is present in mammals that is developmentally distinct from, and can function without, the SCN

About the Chrononutrition: from epidemiology to molecular mechanism symposium

The realisation of the importance of the timing of food intake across a 24h period has established the field of chrononutrition. This is a field where understanding of basic mechanisms can have translational benefit.

In this one-day symposium, we have gathered together some of the leading researchers in the field of chrononutrition from the UK, Europe and the USA, to share their latest research from human studies and animal models, and from epidemiology to molecular mechanisms.  We are pleased to highlight a plenary lecture to be given by Satchidananda Panda from the Salk Institute, USA, whose research on circadian rhythms and time restricted feeding has brought to prominence the importance of this field to human health.

Evidence is accumulating that in humans, our intrinsic circadian rhythm has consequences for the timing of food intake. When we eat during a 24-hour period may underpin a metabolic response dependent upon the size of the meal, leading to a view that there may be an optimal time to consume meals of different caloric contents (breakfast, lunch and dinner); for example, a higher caloric intake during the middle of the day may improve parameters of the metabolic syndrome and reduce body fat.

More information: http://www.physoc.org/chrononutrition/
Kindly supported by the Journal of Neuroendocrinology.